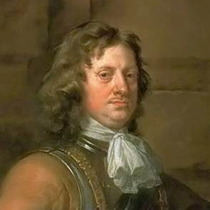 Infantry officer, naval officer and politician. Born Northamptonshire. Patron and good friend to Pepys. Fought on behalf of Cromwell's Commonwealth first in the army and then as a General at Sea. He survived the restoration with apparent ease and served Charles II as admiral. He purged the navy of republican officers and he commanded the fleet that brought the king back from exile. He was rewarded with a handful of honours and titles including 'Earl of Sandwich'.  He invested in the slave trade.

His role at sea found him fighting the Dutch at the Battle of Solebay (Southwold Bay) where his ship, the Royal James, was attacked by fire ships. It is unclear whether he drowned or burnt to death but his body, along with many others, was washed ashore and identified from the clothing.

Not the 'Sandwich' of the eponymous luncheon food, he was much later.

This section lists the memorials where the subject on this page is commemorated:
Edward Montagu, 1st Earl of Sandwich