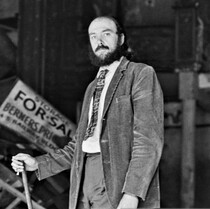 In the 1939 England and Wales Register he is listed with his parents at 42 Derby Hill, Lewisham. His entry reads ' At school. (School at present evacuated)'. However, unfortunately, it does not say as to where he was evacuated. His father was shown as 'Police officer. City of London Police (Regulars)'. Electoral registers in 1955 show him and his parents still listed at this address.

His marriage to Anne V. Nevill (b.1935) was registered in the 1st quarter of 1956 in the Lewisham registration district and electoral registers in 1957 and 1958 show them both recorded at 15 St German's Place, Blackheath.

He was an historian and antiques dealer. Owner of the Spread Eagle and reportedly ‘Mr. Greenwich’, was one of the founder members of 'Greenwich Industrial History Society', where he contributed a number of articles on Greenwich-based cutlery manufacture. Also a founder member of the Greenwich Society.

Electoral registers from 1960 lists him and his wife at 37 Hyde Vale, London, SE10 whilst telephone directories in London from 1964 to 1983 show him as 'Moy, R.F, Antiq Dlr, 37 Hyde Va SE10'. Records at Companies House confirm that he was still at 37 Hyde Vale, London, SE10 8QQ when he served as a Director of The Greenwich Theatre Limited from 27 April 1995 until he resigned on 15 September 1997. His occupation was recorded as an antiques dealer/restaurateur.

He died, aged 72 years, on 23 November 2004, his death being recorded in the Lewisham registration district.. His obituary can be found in The Independent, dated 23 December 2004.

This section lists the memorials where the subject on this page is commemorated:
Dick Moy

We found a reference to the Mission at the Branch Street address in the Child...

Its aims are to preserve the environment and promotion of the amenities of Ep...

We can find no information but assume this is/was a group created to protect ...