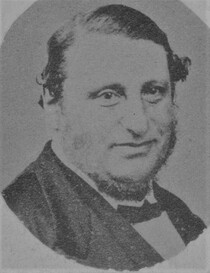 Our colleague Andrew Behan went on to research this man and his family. As you will read below, the MDFCTA question marks can all be removed - they guessed correctly. The executor who erected the troughs, Frank D., was one of David Benjamin's many children. Aged 25 David Benjamin married Esther, a 15/16 year-old girl, and she bore him 16 children, being aged 43 when the last was born. Only two failed to reach adulthood. It is such a shame that Esther's trough has gone missing - it's the least she deserves.

In the 1861 census he is shown as a landed proprietor and fund holder living at 86 Westbourne Terrace, Paddington, with his wife, five sons, 3 daughters, his sister in law Sarah Solomon (1823-1900), a butler, a housemaid, a nursemaid and a nurse. The 1871 census confirms he was still residing at 86 Westbourne Terrace as a retired merchant, with his wife, 5 sons, 4 daughters, his sister in law, a governess, a housemaid, a lady's maid, a cook, a kitchen maid, together with a butler whose wife was also employed as a second housemaid and their son who was a employed as a page.

He was still at 86 Westbourne Terrace at the time of the 1881 census where he shown as a widower living on dividends, with 5 sons, 3 daughters, his sister in law, a butler, 2 housemaids, 2 lady's maids, a cook and a kitchen maid. The 1891 census shows him as living on his own means at 86 Westbourne Terrace, with 2 sons, 1 daughter, his sister in law, a housemaid, a parlour-maid, an under housemaid, a cook, a kitchen-maid, together with a butler and his wife who was employed as a lady's maid.

This section lists the memorials where the subject on this page is commemorated:
David Benjamin

We're guessing that June was a wild or feral animal of some sort, possibly a ...