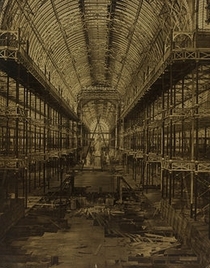 After the Great Exhibition of 1851 closed, the Crystal Palace was dismantled and reconstructed in Sydenham. During a time of high unemployment the project provided jobs for over 7,000 workmen. The accident occurred when tons of scaffolding supporting the centre transept collapsed and killed twelve workers.

The cause of the collapse was never determined, but the fact that the scaffolding was supported not on the ground, but on already constructed galleries around the central transept may have contributed to the accident. Our photograph shows the reconstruction underway.

This section lists the memorials where the subject on this page is commemorated:
Crystal Palace fatal accident