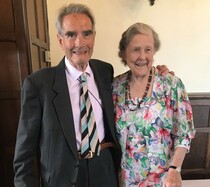 It seems strange that a Councillor would chose to use her husband's name when carrying out official duties, in the 80s - very old fashioned.

Our colleague, Andrew Behan, has carried out some research on this person. Anne Mary Butler Wilson was born in August 1930, a daughter of David Butler Wilson M.C. (1889-1961) and Dorothy Catherine Wilson née Bunn (b.1898). Her birth was registered in the Manchester South, Lancashire, registration district and her father was a paper merchant.

She was appointed as a Justice of the Peace in Westminster and was elected as a councillor on Westminster Council where she served as the Lord Mayor of Westminster for the 1986-87 year of office. She was made an Officer in the Most Excellent Order of the British Empire (O.B.E.) and according to Companies House she held directorships in 10 companies.

Our picture shows her with her late husband.

This section lists the memorials created by the subject on this page:
Councillor Mrs Terence Mallinson

The plaque is in front of a tree stump, so that accounts for the "lost" tree ...