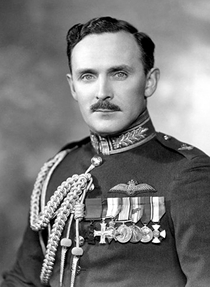 Aviator. Born Ferdinand Maurice Felix West in Paddington. Known as Freddie, he enlisted in the army at the outbreak of WW1 and transferred to the Royal Flying Corps in 1917. On the 12th August 1918, while searching for the enemy's positions, he spotted a German troop concentration. He almost immediately came under attack and was hit in the leg. He managed to manoeuvre his plane so that his observer was able to fire several gunshots into the enemy machines, which drove them away. He twisted his trouser leg into a tourniquet to stem the flow of blood from his wounds, and although in excruciating agony, insisted on reporting his findings. His left leg had five wounds, and had to be amputated. He was invalided back to Britain, where he learned that he had been awarded the Victoria Cross.

This section lists the memorials where the subject on this page is commemorated:
Captain Ferdinand West VC

{Beneath an image of a Victoria Cross medal:} Captain Ferdinand West, Royal A...