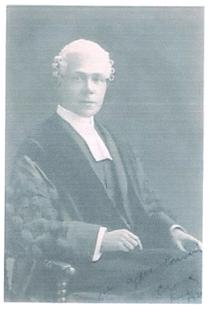 Islington Town Clerk in 1921, the year the photo was taken.

Andrew Behan has kindly carried out some research on this man:
Clarence George Eugene Fletcher was born on 19 September 1875, the son of George and Harriet Annie Fletcher née Cook. His father was a policeman. He was baptised on 26 December 1875 at St George Church, Bloomsbury and the family were living at 13 Kenton Street, Bloomsbury. The 1881 census shows the family had moved to 13 Kempson Road, Fulham and in 1891 they were at 30 Crookham Road, Fulham. The 1891 census shows his occupation as a Boy Copyist. On 6 September 1900 he married Nellie Molyneux at the Parish Church, Tooting and he gave his occupation as a clerk living in Stoke Newington. The 1901 census shows him and his wife living at 53 Evering Road, Hackney. They constantly moved residence as they were at 51 Rectory Road, Hackney in 1905 and at 74 Rectory Road, Hackney in 1910. The 1911 census shows that he was now a Deputy Town Clerk and they had three children, Eric aged 8, Eva aged 5 and Clarence aged 8 months. They also had a female domestic servant living with them. In 1915 they had moved to 60 Fountayne Road, Hackney and in 1919 they were at 100 Highbury New Park, Islington. The London Gazette of 30 March 1920 shows that he was awarded the CBE as the Town Clerk, Borough of Islington. By 1927 they had moved house to Oak Lodge, Bycullah Road, Enfield and he died here on 20 February 1929. Probate was granted to his widow and his effects totalled £4,237-19s-1d.

This section lists the memorials where the subject on this page is commemorated:
C. G. E. Fletcher

Alderman, Lord Mayor of London 1851, chair of the Executive Committee for th...

Connected with the Chelsea Temperance Society for 21 years.  He was actively ...