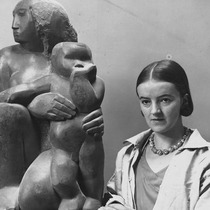 Born in Wakefield as Jocelyn Barbara Hepworth. At art school met and became a friendly rival of Henry Moore, though it was she who first 'pierced' her sculptures. With her first husband had a son who died in a flying accident in 1953. Married and had triplets with Ben Nicholson. The children were sent to boarding schools and were not allowed to disturb her in the studio.

Other work in London - "Winged Figure" (1963) on the side of John Lewis in Oxford Street (where she ensured a lamppost was moved to improve the view of the work) and "Monolith Empyrean" in  Kenwood House Gardens. A piece in Dulwich Park “Two Forms (divided circle)” was stolen in 2011. See also Waterloo Bridge for an opportunity missed.

This section lists the memorials created by the subject on this page:
Barbara Hepworth

Born on the Scottish island of Islay. Some information about Hodge can be fo...

Son of John Bacon the elder

Sculptor active in 1984. We can find no information so we need to check our t...