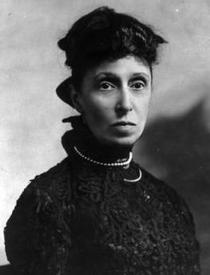 Poet and journalist. Alice Thompson was born in Barnes. Her paternal grandmother was an unmarried Creole.  Educated with her sister entirely by their father as they lived a peripatetic life mainly in Italy.  Converted to Catholicism and fell in love with her priest, and he with her.  He arranged to be sent abroad and the consequent sorrow resulted in some fine poetry, e.g. Renouncement, 1875.  Married the RC journalist, Wilfrid John Meynell in 1877.  They lived at 47 Palace Court and had 8 children.  He edited some magazines often with her help.  She contributed articles to his magazines and others such as the Spectator, and wrote a weekly column for the Pall Mall Gazette.  She formed a close friendship with Coventry Patmore but for him it was love so she broke it off completely.  George Meredith also fell in love with her as did Francis Thompson, a close friend of the family, but she protected her happy marriage.  She supported women’s rights and brought this in to some of her later work. Died at home, 2A Granville Place.

We have take the birth date from the Oxford Dictionary of National Biography (Wikipedia differs).

This section lists the memorials where the subject on this page is commemorated:
Alice Meynell