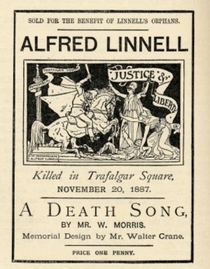 During 1886-7 a number of political rallies took place in Trafalgar Square. These were organised by socialists and opposed by the authorities. On 13 November 1887 the rally was attended by about 30,000 people and led by John Burns, William Morris, Annie Besant and other significant socialists.

The police charged the protestors and injuries were sustained on both sides. Following this Bloody Sunday the protestors regrouped on the following Sunday and the same happened again only this time Linnell, a law clerk, was run down by a police horse and died two weeks later in hospital.

His funeral took place on 18 December and this too provided an opportunity for a political gathering. Manchester University's Dr Peter Yeandle says this was organised to be comparable to Wellington's in 1852, was attended by over 100,000 people and that it went off peacefully. The Levellers made a similar use of Thomas Rainsborough's funeral in 1648.

Londonist points out: "A procession started in Soho with thousands attending, but many weren't up for the six mile trudge to Tower Hamlets, especially not in the rain. By the time they reached the cemetery, the final internment was only attended by comparatively few."

This section lists the memorials where the subject on this page is commemorated:
Alfred Linnell