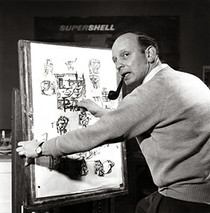 Designer. Born Abraham Gamse in Whitechapel. In World War II, he was approached by the War Office to produce a recruitment poster, and became an official war artist, designing many more posters. After the war, he freelanced for a number of companies, designing postage stamps, jackets for Penguin Books and probably, most memorably, the emblem for the 1951 Festival of Britain.

Games was a skilled and witty graphic artist whose name crops up all through this period. Basically he drew the '50s for us.

This section lists the memorials where the subject on this page is commemorated:
Abram Games

Born Aberdeen. Winner of the Prix de Rome. Other work in London includes the ...