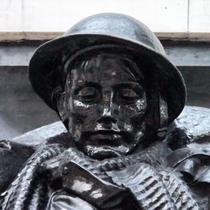 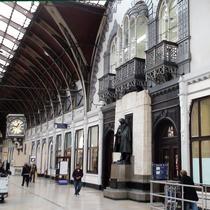 {On the black stone attached below:}
3312 men and women of the Great Western Railway gave their lives for King and country.

{Inscribed on the base of the statue:}
C Sargeant Jagger Sc.
A. B Burton, Founder, Thames Ditton

The statue represents a soldier. To the left, in the cream marble, is a carved relief of an anchor with ropes, representing the navy and to the right is a eagle in flight, very similar to the RAF insignia.

Unveiled by Victor Spencer Viscount Churchill, not a close relative of Winston.

This section lists the subjects commemorated on the memorial on this page:
War Memorial at Paddington Station

3,312 men and women of the Great Western Railway died in the two world wars.

This section lists the subjects who helped to create/erect the memorial on this page:
War Memorial at Paddington Station