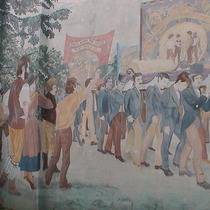 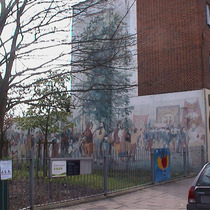 {On a placard held by a character in the mural:}
On Copenhagen Fields, just north of here, in 1834, over 100,000 Londoners met to march for the pardon of the 6 Dorset farm labourers, known as the Tolpuddle Martyrs, transported to Australia for joining a trade union. 12 trade unionists carried a huge petition mounted on a pole at the head of the 6 mile long procession to Parliament at Westminster. The government was forced to give pardons and eventually all of the transported labourers returned home.

A modern information board informs that the mural was painted by Dave Bangs in 1984, celebrating the 150th anniversary of the Tolpuddle Martyrs demonstration and used local people as models.

While taking the photographs (April 2008) we met a very nice park warden who told us that there are plans to restore the mural, which has become faded over the years. It is also planned to repaint the placard bearing the information, slightly to the left so that it is no longer rendered practically illegible by the insensitive (crass) placement of the railings.

The mural is beautifully tailored to the site, with the procession filling in the horizontal space and a large tree occupying the otherwise vacant area above.

This section lists the subjects commemorated on the memorial on this page:
Tolpuddle Martyrs mural

Copenhagen House was a famous tavern &amp; tea-garden which stood in what is ...

This section lists the subjects who helped to create/erect the memorial on this page:
Tolpuddle Martyrs mural

This section lists the other memorials at the same location as the memorial on this page:
Tolpuddle Martyrs mural

From Islington Tribune, October 2008: "The mural has been there for years and...

A montage of scenes, all relevant to the area at the time: construction activ...