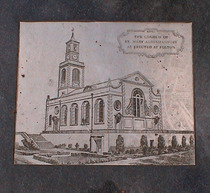 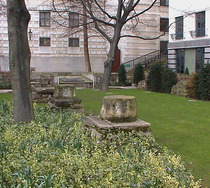 {On the engraving:}
The Church of St Mary Aldermanbury as erected at Fulton.

Site of the Church of St Mary Aldermanbury.
First mentioned in 1181, destroyed by the Great Fire in 1666, rebuilt by Wren, destroyed by bombing in 1940, the remaining fabric removed to Westminster College, Fulton Missouri, USA, 1966 and restored as a memorial to Sir Winston Churchill.

This plaque placed by Westminster College

The plaque is huge and horizontal and very difficult to photograph in its entirety so we captured just the engraving of the church in its new location.

See St Mary Aldermanbury for the story of why there is a Wren church in Missouri, USA.

Around the wall of the sunken garden you can see a number of round holes. These were intended as nesting boxes for blue tits. They always appear to be unoccupied whenever we visit and we've been told that blue tits will not nest within 10 metres of another blue tit so: nice idea, failed in the execution.

There is a campaign to turn this church into "a memorial of national significance to commemorate the heroism and sacrifice of the citizens of London during the Second World War and in subsequent bombings."

This section lists the subjects commemorated on the memorial on this page:
St Mary Aldermanbury & Churchill

This section lists the subjects who helped to create/erect the memorial on this page:
St Mary Aldermanbury & Churchill

In loving memory of Pebbles our station cat, died 26th May 1997.Greatly loved...

We have also found this lovely insignia at Claremont Close.