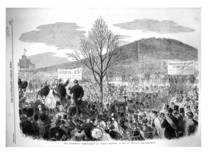 {The plaque erected with the 1964 tree read, in bright colours on a black background:}
SHAKESPEARE OAK.
Planted by Dame Edith Evans, D.B.E., for the Society for Theatre Research on April 23rd, 1964, to commemorate the Shakespeare Quatercentenary and to replace the oak planted by Samuel Phelps nearby on April 23rd, 1864.

Our image showing the 1864 tree being planted is from eBay. It's from page 418 of 'The Illustrated London News', April 30 1864, captioned 'The Shakspeare (sic) Commemoration in London: planting an oak on Primrose Hill – see page 422.'

Two articles in the Camden New Journal (August 2013 and April 2014) tell the story of this tree and its replacement:

100,000 people attended the planting in 1864 which was organised by the Workingmen’s Shakespeare Committee to celebrate the 300th anniversary of Shakespeare's birth in 1564. This group was set up following disappointment in the commemoration efforts of the government-appointed committee. The tree was planted by actor Samuel Phelps. Chartist poet Eliza Cooke wrote a poem and had intended to read it there herself but due to sickness could not attend so someone else read the poem.

The tree died but was replaced 100 years later, on April 23, 1964, by actor Dame Edith Evans at a smaller event organised by Society for Theatre Research. The Royal Parks Agency provided a plaque but that went missing very quickly and the RPA now have a no-plaque policy for trees, for this very reason.

Our image of the current tree comes from the CNJ but we have no idea which of the many trees on Primrose Hill it is. It's said to stand "on the slope of the hill". If you know this space perhaps, with this photo, you can find this tree?

This section lists the subjects commemorated on the memorial on this page:
Shakespeare's tree

This section lists the subjects who helped to create/erect the memorial on this page:
Shakespeare's tree

When we first saw the plaque it was in the pavement close to the tree but is ...

This English Oak was planted to commemorate the 2000th tree of the Millennium...

Shortly after we published, our colleague, Andrew Behan, spotted that we'd mi...

This tree is a memorial to the dead of Hiroshima and Nagasaki.

This is the millionth tree of the Countryside Commission's Task Force Tree Pr...