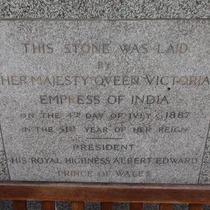 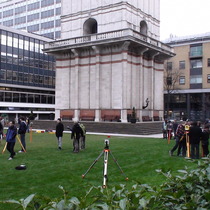 This stone was laid by Her Majesty Queen Victoria, Empress of India, on the 4th day of July 1887 in the 51st year of her reign.
President - His Royal Highness Albert Edward Prince of Wales.

The stone was laid only 14 days into her 51st year so we're taking this as a late commemoration of her Golden Jubilee. And the remaining tower we are taking as a memorial to the Institute of which it is the only remains.

The day we visited seemed to be “Theodolite Day” – a local custom in which the lads and lasses bring their theodolites out onto the village green and, well, perform theodolisation, we guess.

A nearby information board gives: "The Queen's Tower is all that remains of the Imperial Institute, which was built to mark Queen Victoria's Golden Jubilee in 1887.  It was 700 feet long with a central tower (the Queen's Tower) and smaller towers at the east and west ends {one tower at each end}.  When it was to be demolished in the early 1960s, the Victorian Society and John Betjeman campaigned against total demolition and the Queen's Tower was saved.
The Queen's Tower is 287 feet tall, clad in Portland stone and topped by a copper covered dome.  the internal wooden structure of the dome is an interesting example of Victorian craftsmanship.  Near the entrance to the tower are two large stone lions.  These are two of the four lions which flanked the entrance to the Imperial Institute.  The other two are now at the Commonwealth Institute in Holland Park.
The belfry contains the Alexandra peal of 10 bells.  Each bell is separately named after members of the Royal family - Queen Victoria, her three sons, her daughter-in-law Alexandra and her five Wales grand-children.  the bells are now rung on Royal Anniversaries between 1 and 2pm."

The architect of The Imperial Institute was T. E. Collcutt.  The building was demolished to make space for Imperial College which was expanding all around it.

This section lists the subjects commemorated on the memorial on this page:
Queen's Tower - IC

This section lists the subjects who helped to create/erect the memorial on this page:
Queen's Tower - IC

This section lists the other memorials at the same location as the memorial on this page:
Queen's Tower - IC

Of the four lions that used to flank the entrance to the Imperial Institute t...

Unveiled 25 November 2000, the 30th anniversary of the commemorated event. In...

Note: other sources seem agreed that Susannah died on the 23rd not the 30th o...