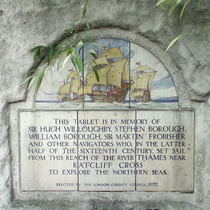 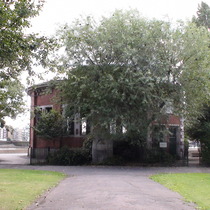 This tablet is in memory of Sir Hugh Willoughby, Stephen Borough, William Borough, Sir Martin Frobisher and other navigators who, in the latter half of the sixteenth century, set sail from this reach of the River Thames near Ratcliff Cross to explore the Northern Seas.
Erected by the London County Council, 1922

This memorial is, oddly, erected very close to, and land-side of, the Wapping cupola which disguises a ventilation shaft for the Rotherhithe road tunnel, opened in 1904, and also houses a spiral staircase.  The corresponding cupola on the southern bank has a memorial plaque.

The plaque refers to a place 'Ratcliff Cross'.  Ratcliff(e) was an area on the northern bank of the river stretching eastwards from approximately what is now Shadwell basin to the Limehouse basin.  Ratcliff Cross was the road that led down to the river, now Narrow Street (if it didn't swerve off to the east rather than carry on in a straight line).  Past Lives has a good map showing Ratcliff Cross as well as lots of stuff showing just what a nautical area it was.  Spitalfields Life also has a whole post dedicated to 'The Lost Hamlet Of Ratcliff" and there we learn "The Cross itself was removed some time after 1732" so seems it was actually a religious edifice, rather than a river crossing which we were leaning towards.

This section lists the subjects commemorated on the memorial on this page:
Navigators

navigators sailed from Thames near Ratcliff Cross to explore Northern Seas, latter half of C16th

Sea captain.  Looking for a trade route, the North-East Passage, a 3 ship exp...

This section lists the subjects who helped to create/erect the memorial on this page:
Navigators

To the glory of God. St Philip, Stepney. This stone was laid as a foundation ...