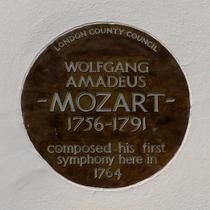 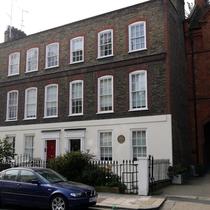 2019: The house is for sale and MansionGlobal's advertising has information about its history: "In 1764 Wolfgang Amadeus Mozart was staying in London, performing for royalty and high society. His proud father, Leopold, who orchestrated the trip, boasted that his eight-year-old son was the 'most extraordinary prodigy, and most amazing genius'.  After the family’s initial successes — Wolfgang performed with his elder sister Maria Anna for George III — Leopold fell ill and the family moved from their lodgings in Soho to the village of Chelsea, which was then in the country. While his father was recovering, musical practice and performances were not allowed, so the young musician spent his time writing his first symphony (Symphony No 1 in E flat, K16).

"The row of houses at the western end of Ebury Street where the Mozarts stayed was called Five Fields Row then, although it was later renamed Mozart Terrace. ... The family stayed at 180 Ebury Street for a couple of months while Leopold recovered before moving back to Soho, according to English Heritage."

This section lists the subjects commemorated on the memorial on this page:
Mozart - SW1

This section lists the subjects who helped to create/erect the memorial on this page:
Mozart - SW1

Site of the Duke of Buckingham's house 1672.The Corporation of the City of Lo...