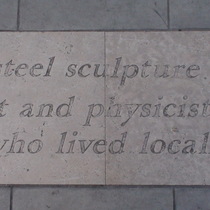 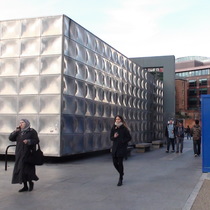 Michael Faraday (1791 - 1867)
This stainless steel sculpture commemorates English chemist and physicist, known for his research into electricity and magnetism, who lived locally.

This shiny steel box contains an electricity substation for the tube, but it is also a memorial to Michael Faraday who was born and lived nearby for the first 5 years of his life.

This long plaque is laid into the paving on the east side of the substation. In our photo the two men are walking over it. Of the 4 benches the middle two are inscribed: Michael Faraday and 1791 - 1867.

A nearby information board (to the north) informs:

The Faraday Memorial
Michael Faraday (22 September 1791 to 25 August 1867)
Near this spot in Newington Butts, Michael Faraday, one of Britain’s greatest scientific figures, was born on 22 September 1791 and his birth is recorded in the family Bible, now in the Cuming Museum. Faraday invented the electric motor, transformer and generator and formulated the field theory of electro-magnetism, which is the cornerstone of modern physics.

His father, a blacksmith, and his mother, who had been in service, had moved from Westmorland to Newington Butts shortly after their marriage in 1786. They lived here until about 1796 when they moved to Marylebone when Faraday was aged five. Faraday spent his entire career at the Royal Institution, which housed Britain’s best equipped laboratory, communicating and applying his fundamental scientific discoveries. During his time there the Christmas lectures for children were started which continue to this day and are now televised. He provided advice to the state and its agencies including overseeing the programme to electrify lighthouses in the 1850s and 1860s.

The practical applications of Faraday’s discoveries have transformed the world. From trains to computers, from satellites to mobile phones, anything electrical uses the scientific principles that Faraday discovered. Without his work our life today would be very different.

Rodney Gordon (2 February 1933 to 30 May 2008)
Rodney Gordon, designer of the Faraday Memorial, graduated from the Architectural Association School in 1957. His first job at the London County Council Architects department was to design this London Underground substation, dedicated to Michael Faraday.
Rodney Gordon’s first design for the memorial was for an inverted glazed pyramid, revealing glowing mercury vapour rectifiers. This was abandoned for fear of distracting motorists.  The final memorial, a stainless steel box suspended from a four columned black steel structure, originally planned floating over a moat, reflects the work of architect Mies van de Rohe. The building exhibits the mantra of the Bauhaus and suggests an electric age generated by Michael Faraday’s discoveries in electricity and electro magnetism. The memorial was listed Grade II in 1996.

This section lists the subjects commemorated on the memorial on this page:
Michael Faraday memorial - substation

This section lists the subjects who helped to create/erect the memorial on this page:
Michael Faraday memorial - substation