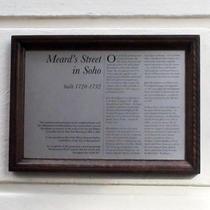 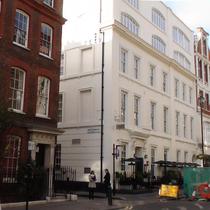 The residents and businesses of this neighbourhood, with the endorsement of Westminster City Council, have erected this plaque in memory of the work of the late Ian Wilder, Councillor for the West End Ward from 2002 to 2009.
It was unveiled on May 18th 2010 by Duncan Sandys, Lord Mayor of the City of Westminster.
In recognition of his pioneering work in proposing Westminster’s Wi-Fi system, this site can be seen throughout the world 24/7.

One of the few surviving streets in London from the early 18th century, this street and much else in Soho was built by John Meard Junior and his father Meard Senior. The Georgian period (1713 – 1830) is generally regarded as the greatest period of English architecture. Most of London’s Georgian houses date from the late 18th or early 19th centuries and very little was built in London during the 1720’s owing to a prolonged recession.

John Meard Junior was apprenticed to his father in August 1700 – ‘John Meard Citizen and Turner... his father and Master admitted to this Freedom’ (Freedom Admissions Register of the Turners’ Company). On his father’s death in 1713 he inherited 20 houses plus St. Anne’s Court – around 50 houses in all.

Meard Junior was one of the great carpenters of his generation at a time when his trade was the key component in the construction of the London townhouse. There is nothing quite like this group surviving in London. Meard built one group of small houses, then two groups of larger houses (now all forming ‘Meard’s Street’), and finally four large townhouses – 67 to 70 Dean Street. The Meard Street houses were built on the land which originally formed the gardens of just five houses – two in Dean Street and Wardour Street, plus one small house between the two. 69 Dean Street was the largest of this group with a four bay frontage.

John Meard Junior was Master of the Worshipful Company of Carpenters’ in 1735, and worked with Sir Christopher Wren at St Paul’s Cathedral and with the architect John James on some of the City’s greatest churches. He died in 1746.

69 Dean Street, where this plaque sits, has many historic associations – its early inhabitants included the 4th Viscount Castlecomer, Sir John Wynn and Sir Thomas Bell. From 1834 to 1898 it housed the famous Novello musical family. From 1928 – 1978 it housed the Gargoyle Club renowned for its mirrored interiors and works of art by Matisse. Its many famous members included the Duke of Windsor, Tallulah Bankhead, Fred Astaire and Dylan Thomas as well as the artists Augustus John, Francis Bacon and Lucian Freud. It is now the Dean Street Townhouse.

2022: We were contacted by David Bieda who wrote: "Meard Street plaque. I’d like a credit as I wrote all that you have used including the text in the plaque which I organised."  We thank David Bieda for this information and we have added him to our list of memorial creators.

Above the modern street sign is another, older, one which reads "Meards Street 1732".

This section lists the subjects commemorated on the memorial on this page:
Meard Street

This section lists the subjects who helped to create/erect the memorial on this page:
Meard Street

2022: The Seven Dials Trust has a page about Bieda, including: "David has cha...

Lord Mayor of the City of Westminster. The youngest to be elected, in May 201...

This delightful plaque has a crest at each end. The open gate rather spoils t...