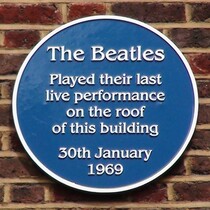 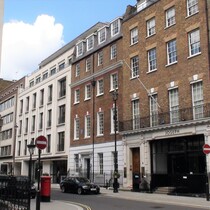 The Beatles played their last live performance on the roof of this building, 30th January 1969.

Note that that, though blue, this is not an English Heritage plaque. At Beatles in London the 'plaque committee' is given as Richard Porter, David Rosen of Pilcher Hershman, Mark Baxter of Mono Media Films, and David Stark of Songlink.

From MentalFloss: "On January 30, 1969, at lunch time, The Beatles appeared on the rooftop of their record label’s headquarters, unannounced, and started performing. Londoners looked on with excitement and bafflement as the world’s biggest band, which hadn’t played live in two and a half years, tried out new material for 42 minutes. It would end up being their final live show." That site has a 3 minute video of the event.

This section lists the subjects commemorated on the memorial on this page:
Last Beatles' concert

In a house near this spot John Henry, Cardinal Newman was born 21st February ...

From Russia Beyond the Headlines:"Brodsky's annual visits to Apartment 2, 20 ...