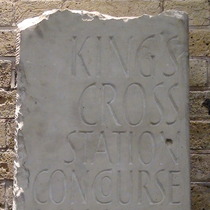 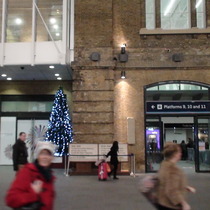 {On the broken piece of stone to the upper right:}
King's Cross Station concourse was opened on 14 March 2012 by the Right Honourable Justine Greening MP, Secretary of State for Transport.

{On the large plaque to the left:}
1914 - 1919. To the immortal memory of the men of the Great Northern Railway who gave their lives in the Great War.

{On the large plaque to the right:}
1939 - 1945. To the immortal memory of the men of the London and North Eastern Railway who gave their lives in the Second World War.

This memorial is taking on different configurations in different locations as the station undergoes its renovation.   We first saw it, and captured it in a corner of the station pre-works.   Most of it was put into storage in about 2008 but the two plaques were re-erected below the (previous) departures board.  Then we spotted this new arrangement in which the broken piece of stone is a new element.  We plan to leave each manifestation of this memorial on London Remembers.

November 2013: the name panels are reinstalled as one of the last parts of the King's Cross Station renovation and we see that this arrangement, which we thought was only temporary, has remained.  So it seems there are to be two war memorials at King's Cross station.

This section lists the subjects commemorated on the memorial on this page:
King's Cross War memorial - 2. temporary

This section lists the subjects who helped to create/erect the memorial on this page:
King's Cross War memorial - 2. temporary

MP and Secretary of State for Transport October 2011 - September 2012.

This is a finely detailed piece of sculpture and you don't have to look too c...