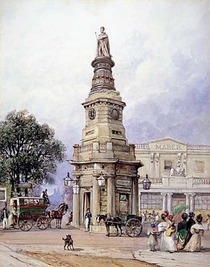 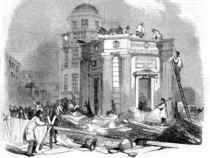 Our image (1835 by George Sidney Shepherd) comes from View from the Mirror where you can find an introduction to the history of the King's Cross area, the station and some related films.

This monument was erected by public subscription to honour George IV who had recently died. Initially other recent kings were also to be honoured. From the circular published in 1830 (to drum up subscriptions) the monument was to have “above the entablature, the four late Kings of England, which will occupy the ... corners.” Three of the four were presumably the Georges: I, II and III, but who the fourth king would have been is less obvious since the previous monarch was the Stuart Queen Anne. Elsewhere there is a suggestion that it would be the then current King William IV. But we can find no image with royals at the four corners. There is an image of the monument showing two very unlikely-looking statues on the visible corners of the edifice, certainly not kings but perhaps the patron saints of our four nations.

Kings or whatever, five statues would make this monument a very expensive construction. We suspect that not enough money was raised and that the four corner statues were omitted. The image we have used is the one we find most likely, with the only statue being the one on top, George IV.

The base of the monument was first used as a police station and then as a pub. But the monument was widely criticised. For example, a "Comic Latin Grammar" (search for 'George') of 1840 included a cartoon drawing of the statue illustrating some grammatical point with the caption "King George the Fourth’s statue at King’s Cross is a standing joke."  We asked our Latin consultant, David Hopkins, to explain the joke to us but he found the whole book lacked humour.  "The cartoon about the statue just seems to be a gratuitous insult to either King George or the sculptor.  The only connection I can see with the text is that the word “statue” originally derives from the Latin word 'sto', meaning 'I stand', because a statue is a 'standing portrait' of the person."

The much-derided statue was removed in 1842 and the rest of the edifice in 1845. But by this time the area was known as King's Cross (which is what the monument was called from inception) and the name stuck. The picture of the demolition comes from Visit King's Cross.

April 2014:  There is a local campaign to erect a plaque to "put the King back into King's Cross".

This section lists the subjects commemorated on the memorial on this page:
King's Cross statue of George IV

This section lists the subjects who helped to create/erect the memorial on this page:
King's Cross statue of George IV

Architect.  He designed the Egyptian Avenue and the Terrace Catacombs in High...