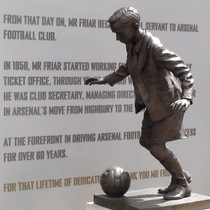 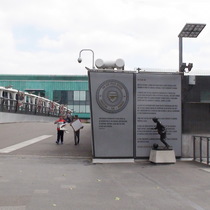 {On the left panel:}
The Ken Friar Bridge
Director - Fan - Pioneer
This bridge is dedicated to Ken Friar OBE, in recognition of his immense contribution to Arsenal Football Club and the move to our new stadium.
14th April 2011

{On the right panel:}
Ken Friar OBE
One day in 1945, a young Ken Friar was playing football with friends in front of Arsenal Football Club’s Highbury Stadium.
A miskick saw the ball disappear underneath a parked car. As Ken Friar hesitantly went to retrieve the ball, the car’s owner appeared from the famous Highbury marble halls, it was none other than the manager of Arsenal, George Allison.
Allison was impressed with young Friar’s enthusiasm and told him to make himself useful by reporting to his office the next day, whereupon the 12 year-old was offered a job as a messenger at the stadium on matchdays.
From that day on, Mr Friar became a loyal servant to Arsenal Football Club.
in 1950, Mr Friar started working full-time in the matchday ticket office. Through years of hard work and dedication, he was the club Secretary, Managing Director, and also a leader in Arsenal’s move from Highbury to the new stadium.

At the forefront in driving Arsenal Football Club to success for over 60 years.

For that lifetime of dedication, we thank you Mr Friar.

The previously named North Bridge, was renamed as the Ken Friar bridge and the left hand panel erected on 14th April 2011. The right hand panel and the statue (representing Friar as a boy), were later additions. We cannot identify the sculptor, but The Sporting Statue Project gives MDM Props.

Friar attended the unveiling of this statue which puts him in a select club - see Fenner Brockway statue.

The Ken Friar Bridge, over the railway, can be seen on the left of our photo. The North Bank Terrace is to the right of, and outside, the photo.

This section lists the subjects commemorated on the memorial on this page:
Ken Friar

Football manager, journalist and broadcaster. He was the BBC's first sports c...

This section lists the subjects who helped to create/erect the memorial on this page:
Ken Friar

This section lists the other memorials at the same location as the memorial on this page:
Ken Friar