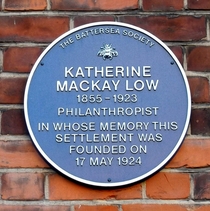 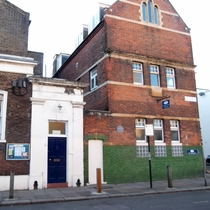 Katharine Mackay Low, 1855 - 1923, philanthropist, in whose memory this settlement was founded on 17 May 1924.
The Battersea Society

These two plaques tell a complex story which we only fully understood once we found this UCL paper. Erskine Clarke, vicar of St Mary's Church Battersea, 1872 - 1909, acquired The Cedars, the large Victorian-style house to the left of our photo, to use for social work purposes. The Cedars Club, founded in 1882, was originally for factory girls and made use of the house and an outbuilding at the back (the right of our photo). Then in 1905 he commissioned J. S. Quilter to design a replacement for the outbuilding which would be called the Cedars Institute, the red brick building in our photo, with "separate club rooms for boys and girls, and a chapel on the attic floor".

Nesta Lloyd was one of Clarke's strongest supporters and became one of the 3 trustees for the Institute. The Trustees also bought The Cedars and Lloyd moved to live there. Elsewhere we have read that she was the Principal of the Institute but after WW1 due to illness she had to retire. One of the other trustees had been killed in the war.

Meanwhile, members of Christ’s College, Cambridge had set up a boys club in Camberwell Road but it had closed in 1915 due to the war. In 1921 this project was revived, the trustees of the Cedars Institute transferred their property to this new club, which opened there in 1922 as the Christ’s College Boys’ Club. This club did not use the house, The Cedars, so in 1924 a newly formed Anglican settlement opened a girls’ club there, the Katherine Low Settlement.

The Institute was extended with a two-storey wing in 1924–5. Following WW2 the two organisations were amalgamated as the Christ’s College and Katherine Low Settlement.

This section lists the subjects commemorated on the memorial on this page:
Katherine Mackay Low

A charity founded as part of the settlement movement, in tribute to philanthr...

Philanthropist. Born in Georgia, USA to British parents. After her mother's d...

This section lists the subjects who helped to create/erect the memorial on this page:
Katherine Mackay Low

As so often happens, this group was formed to campaign against the proposed d...

This section lists the other memorials at the same location as the memorial on this page:
Katherine Mackay Low

John Clinton, aged 10, who was drowned near London Bridge in trying to save a...