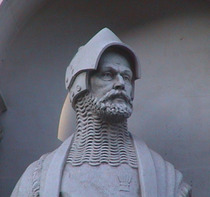 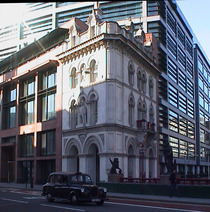 The sword he sports represents the one which removed Tyler's head, the original of which (the sword, not the head) is on display at the Fishmongers' Company.

Holborn Viaduct, built across the Fleet valley to connect Holborn with Newgate Street, was opened by Queen Victoria on 6 November 1869. The development included buildings, or pavilions, designed by William Haywood, at each corner, each housing a flight of steps linking Holborn Viaduct with Farringdon Street below and displaying a statue on the first floor facade. The firm Farmer & Brindley produced much of the sculpture, but not the statues.

On the bridge itself are four bronze statues, of scantily dressed women representing Fine Arts, Science, Agriculture and Commerce.

The sculptor of all 4 statues and Commerce and Agriculture was Henry Bursill. For more info on the Viaduct see Patrick Baty.

A London Inheritance have a photo to show that this pavilion is a replica of the original which was badly damaged in WW2. The first reconstruction of this corner had a massive Atlantic House covering the whole site but in 2001 that was replaced with this, at least equally massive, building but with this recreation of the pavilion on the corner.

Engineering Tmelines has a full history of the Viaduct. Ian Visits has photographed the 4 stairwells.

This section lists the subjects commemorated on the memorial on this page:
Holborn Viaduct - Walworth

This section lists the subjects who helped to create/erect the memorial on this page:
Holborn Viaduct - Walworth

Bursill also sculpted the allegorical statues on Holborn bridge and seems to ...