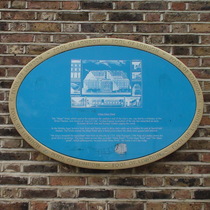 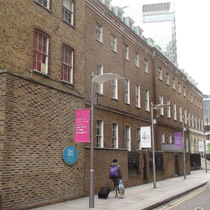 {Below some early drawings of the Hospital buildings:}
Great Maze Pond
The "Maze" Pond, which used to be situated at the southern end of the Guy's site, was fed by a tributary of the River Thames, now known as 'Guy's Creek'. Archaeological excavation of the site has unearthed an early Romano-British boat and Roman timbers edging the creek.
In the Middle Ages farmers from Kent and Surrey used to drive their cattle up to London for sale at Smithfield Market. The fields around the Maze Pond were a focal point where the cattle were grazed and watered.
"Mr Guy's Hospital for Incurables" was built on this site in 1725. John Rocque's 1746 Map of London shows the pond still in existence. The local street-names then included "Maze Pond", " Little Maze Pond" and "The Maze pond", which subsequently became Great Maze Pond - the name it still has today.

That's all well and good, but was there a maze? All that text and not a word about the maze. Elsewhere we've read that 'maze pond' was probably a corruption of 'May's pond', as in farmer May. Disappointing, isn't it?

In our photo the three iron-work panels can just be seen on the railings in front of the lady with the suitcase. In all honesty only the one representing Thomas Guy can be considered a memorial but they are all rather fun - we particularly like the one with the grapes.

An information board attached to the railings of the gate explains that the theme for the three panel artwork is the Hospital's motto: “It is better to give than to receive”, "Dare Quam Accipere". The book in the middle panel carries the text: "Created by Chris Butcher, artist blacksmith for George James & Sons, blacksmiths".

Left to right: the first panel shows the grapes given by visitors taking root in the patient's bedside cabinet. The second panel represents how staff give to the hospital: time, skill, knowledge and scientific endeavour. The last panel shows Thomas Guy giving the plans of the hospital. For simplicity we've put links to the creators only on the page for the last panel.

This section lists the subjects commemorated on the memorial on this page:
Great Maze Pond

This section lists the subjects who helped to create/erect the memorial on this page:
Great Maze Pond

This section lists the other memorials at the same location as the memorial on this page:
Great Maze Pond

Mehndi is the use of henna to decorate hands etc. in India and neighbouring c...