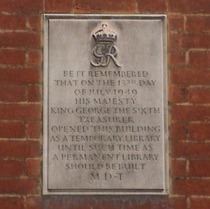 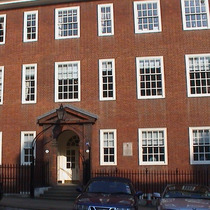 Plaque: George VI and the library

{Carved in the stone, a crown surmounts the initials "GR", above:}
Be it remembered that on the 13th day of July 1949 His Majesty King George the Sixth, Treasurer, opened this building as a temporary library until such time as a permanent library should be built.
MD - T

The opening of a temporary library seems a rather minor event for which to get a King out of bed. Given the date perhaps the war had damaged the normal library. We believe the last line of the plaque means that the Treasurer at the time had the initials "MD". The body of the text describes the King (who was the Royal Bencher of the Inn) as "Treasurer"; perhaps the monarch is some sort of honorary Treasurer?

This section lists the subjects commemorated on the memorial on this page:
George VI and the library