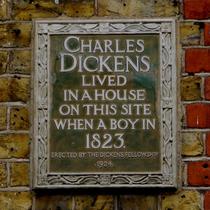 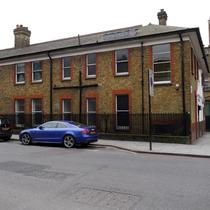 Credit for this entry to:
Alan Patient of www,plaques of london.co.uk

Charles Dickens, lived in a house on this site when a boy in 1823. Erected by the Dickens Fellowship, 1924.

Dickens' home was at 16 Bayham Street where he stayed as a boy. That particular address no longer exists, but this plaque is in place at number 141. Our entry used to claim, erroneously, that this was Dickens' first London home but our good friend, Dr Ruth Richardson, writes "Bayham Street was NOT Dickens's first home in London. He certainly lived there, and in 1823, but he had lived in London for two years 1815-16, in Norfolk Street (now Cleveland Street). Bayham Street was a miserable time for him, the family was on its way down to the Marshalsea Prison, but they lived in Gower Street (on the site now occupied by the cruciform building, the old University College Hospital) before they were finally imprisoned."

This section lists the subjects commemorated on the memorial on this page:
Charles Dickens - NW1

This section lists the subjects who helped to create/erect the memorial on this page:
Charles Dickens - NW1

Restored by mine host Michael Tierney & Charrington, The Windsor Castle was o...

Marylebone Assoc. for Improving the Dwellings of the Ind. Classes

Marylebone Association for Improving the Dwellings of the Industrious Classes...