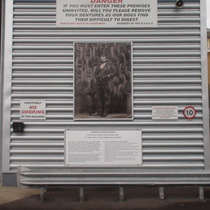 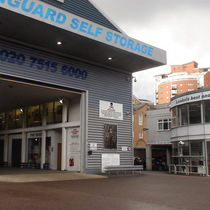 {On the left side of the information board:}
Isambard Kingdom Brunel
One of the first regular visitors to these works
9th April 1806 - 15th September 1859 (53 years)
Samuel Brown, a successful Naval Captain, was a brilliant engineer in his own right. In 1806 he formed a partnership with his cousin, Samuel Lenox to be known as Brown Lenox & Co. Ltd and built this site, 188 West Ferry Road, in 1812 as a chain-works. Both Brunel and Brown were magnificent engineers. Brunel visited these works on many occasions to discuss the anchor chain for the "Great Eastern" being built at the adjacent yard {Napier Shipyard, 460 yards away on West Ferry Road}. This picture was taken in these works, in front of the chains for that vessel.

These works were purchased by Vanguard in 1980 ...{information about the current Vanguard company.}

{On the right side of the information board is a list of Brunel's achievements:}

Satellite View suggests that none of the original works buildings have survived.

A little to the south on Westferry Road is the site where Brunel built and launched the Great Eastern. There is a modern information board there but it is so degraded by weather that we did not to collect it. We'll go back and hope it has been renewed.

This section lists the subjects commemorated on the memorial on this page:
Brunel - E14

This section lists the subjects who helped to create/erect the memorial on this page:
Brunel - E14