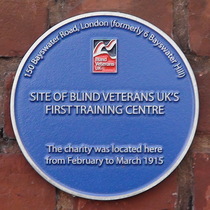 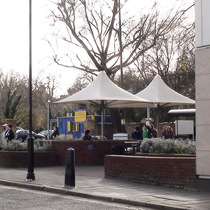 The rather oddly-placed plaque is only visible from the side street, St Petersburgh Place.

Trying to locate an image of the building that was on this site we found: Lost Hospitals of London says this site was "6 Bayswater Hill, a property lent by Mrs Lewis Hall".  From British History On-line "St. Petersburgh House, no. 8 Bayswater Hill, was the home of the conveyancer Lewis Duval (1774-1844) and then of his niece's husband the Vice-Chancellor Sir Charles Hall (1814-83). .... The site of nos. 6 to 8 Bayswater Hill was advertised as suitable for high-class flats or a hotel in 1912." Seems likely that the house on the corner of St Petersburgh Road might be called St Petersburgh House.

Alamy has 1875 architectural drawings for "7 & 8 Bayswater Hill". These show grand red brick mansions, with, sketched in to their left (west) a lower, older, house which could well be number 6. If the site was being advertised for development in 1912 (only 37 years later) then the site presumably had not been developed with these drawings or any others and number 6, at least, was probably still an old-fashioned, low value property not required for anything else when it was lent by Mrs Hall for just 2 months.

This section lists the subjects commemorated on the memorial on this page:
Blind Veterans UK

This charity was founded at the start of WW1 by Arthur Pearson, the newspaper...