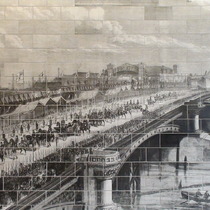 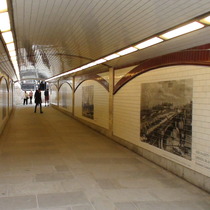 {Each print is labelled. The one we have chosen for illustration is:}
Her Majesty Queen Victoria opening Blackfriars New Bridge.
Illustrated London News, 13th November 1869.

{The tiles also carry this text:}
The Blackfriars Bridge pedestrian underpass was officially opened on the 11th October 1995 by: the Right Honourable the Lord Mayor of London, Sir Christopher Walford and the Worshipful the Mayor of Southwark, Councillor Aubyn Graham.

This south-bank pedestrian tunnel is decorated with prints from the Guildhall Library.  At the western end of the tunnel some spoof text has been added:

“Unimpressed with the selection of flat-pack bridges offered, a design from the argos catalogue was chosen via public vote in the spring of 1757.  Upon the bridge’s arrival the instruction booklet was lost immediately by head surveyor Robert Mylne.”

We can’t find out when this was installed but it was still there in 2014.  Hats off to Hannah Wilson, the art student responsible.

This section lists the subjects commemorated on the memorial on this page:
Blackfriars Bridge - underpass

This section lists the subjects who helped to create/erect the memorial on this page:
Blackfriars Bridge - underpass

{On plaque attached to side:}This post box has been painted gold by Royal Mai...

Even in our rather dismal photo you can see that there is a hill here, in an ...