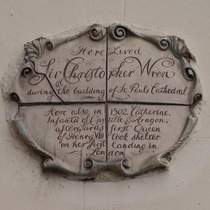 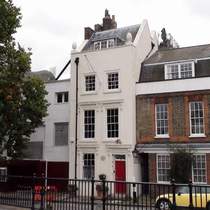 Charming plaque but the history is baloney, according to Gillian Tyndall in her book 'The House by the Thames and the People who Lived There'. This house was built about 1710, the year that St Paul's was completed so Wren could not have used it during the construction, and Catherine of Aragon would have had to hang around for almost 200 years waiting for it to be built if she wished to shelter here. However the presence of the plaque probably did help save this lovely house from post-war development.

Tindall reports that there had been an 18th century plaque referring to Wren on another Bankside house.  When that was demolished in 1906 the plaque was rescued and attached to a wall around the power station, and then presumably lost for good when that was redeveloped after the war.   It was 1945 that Malcolm Munthe acquired number 49 and it was probably his knowledge of that plaque which prompted him (a bit of a fantasist) to create his own.  Tindall’s excellent book covers the history of the whole area, not just the house itself.

A London Inheritance has some historic photos, for instance of the house in 1947 without the plaque.

This section lists the subjects commemorated on the memorial on this page:
49 Bankside

This building was the Head Office and branch of the Catholic Building Society...