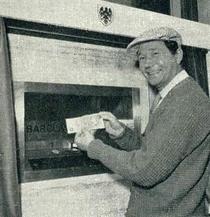 In spite of the plaque's claim, there is evidence of a cash dispensing machine being used in Tokyo in 1966. The invention of the British version has been credited to John Shepherd-Barron of the printing firm De La Rue (who know a thing or two about money). The photograph on the right shows the actor Reg Varney making the first withdrawal. He was a local resident and had achieved some fame in the television series 'The Rag Trade', but went on to greater popularity in the sitcom 'On the Buses'.

This section lists the memorials where the subject on this page is commemorated:
World's first cash machine

A company which provides workspace throughout the Lee Valley and which helps ...

Retail group specialising in clothing and food, founded by Michael Marks and ...