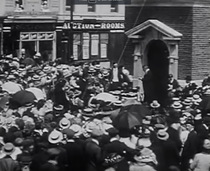 The Bexleyheath Centenary booklet informs: Epps was a local resident. As well as designing the tower he had designed a silver key which was used to open the door of the clock tower in the opening ceremony and you can see that happening in the London's Screen Archives film.

LMA has a pdf from the GLC Architects Department concerning building regulations. It lists hundreds of buildings with their architects and dates. Epps' name appears 20 times with dates ranging approx 1901-1936, often associated with Industrial buildings and often in partnership with Claude V. Ponder or others. A good proportion of Epps' buildings on the list are industrial, such as the Brehmer Folding Box Factory. The Bexleyheath clock tower does seem to have been his masterwork.

Our picture comes from the film of the opening ceremony. The ceremony is described in the Booklet and from that we deduce that the man standing on the platform facing the camera in this screen shot is Epps. (OK, it's not a great picture of Epps - you find a better one!)

This section lists the memorials created by the subject on this page:
Walter M. Epps

Engineer and architect, and a Captain in the Corps of Royal Engineers.  Born...

Borough Engineer of Southwark Council in 1936.  He designed the Walworth Clin...