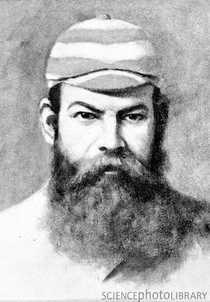 Cricketer and medical practitioner. Born William Gilbert Grace at Clematis House, Downend, Mangotsfield, near Bristol. He started playing first-class cricket for Gloucestershire in 1864. Took his medical degree in 1879 and had a practice in Bristol, although he devoted most of his time to cricket. Technically an 'amateur', a member of the MCC, he was in fact paid for playing. Toured Canada and the U.S.A. By the end of his career, he had made 126 centuries. Died at his home, Fairmount, Mottingham.

His beard is so impressive his image was used as the face of God in the 1975 film 'Monty Python and the Holy Grail'. We've heard that Grace never shaved, ever.

This section lists the memorials where the subject on this page is commemorated:
W. G. Grace

{On the plaque on the gate pier:} To the memory of William Gilbert Grace, the...

The association is a charity, whose objects are the practice, teaching, train...

The Hospital for Tropical Diseases was founded on an ex-naval ship in 1821, b...