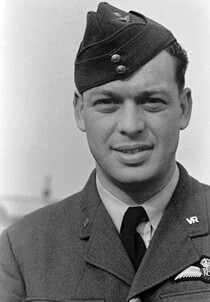 He married Stanlee A. Data (b.1915) and their daughter, Mikel Ann Bono (1937-1995) was born on 8 June 1937. The United States Federal Census 1940 shows them residing at 185 College Avenue, San Francisco, California. He was training as a service pilot in Tulsa, Oklahoma, USA, when in 1940 he went to Canada and joined the Royal Air Force Volunteer Reserve. Embarking from Montreal, Canada, aboard the S.S. Epin of the Standard Fruit and Steamship Company Ltd and arriving in Liverpool on 15 September 1940, he is shown on the ship's manifest as a Pilot Officer, travelling 1st Class.

He was assigned as a founder member of No.71 Squadron and our Picture Source shows his service details. It also claims that his US Draft registration record gives his height as 6 feet 11.5 inches which would have made it a very tight fit in both Hawker Hurricane and Supermarine Spitfire aeroplanes.

This section lists the memorials where the subject on this page is commemorated:
Victor Bono