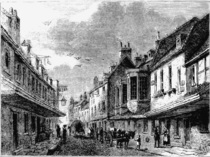 From British History On-line 1: The Brandon family had a residence on this site from at least about 1450.

From British History On-line 2: "It was ornamented with turrets and cupolas, and enriched with carved work; at the back, the range of outbuildings formed an enclosed court." In 1536 King Henry VIII and Charles Brandon, Duke of Suffolk exchanged properties: Suffolk House for Norwich House, the house of the Bishop of Norwich in the Strand at St. Martin's-in-the-Fields. ".. for the next 20 years the house was used occasionally as a royal residence or for the reception of distinguished visitors."  1545 - 1551 a mint was operated in part of the property.

Queen Mary gave the mansion to Nicholas Heath, Archbishop of York. He sold it almost at once and its gradual splitting up and demolition began. Edward Bromfield, Lord Mayor in 1637, owned and lived here in 1650. His son John was living here in 1679 and the property passed to his wife's family, the Lants. In 1773 it consisted of seventeen acres, on which were 400 houses. The entire estate was sold off in 98 lots, early in the 1800s. The image shows the building in 1825 which rather contradicts a statement in British History On-line that the mansion was was "completely demolished by June, 1562".

Not to be confused with Northumberland House - Charing Cross.

This section lists the memorials where the subject on this page is commemorated:
Suffolk House - SE1

The plaque refers to "Thomas Branden, Duke of Suffolk". We have two problems ...

4th and last baronet. In 1798 he built a country villa in Highgate which late...