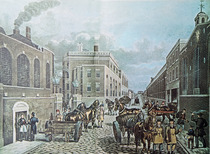 The name was taken from the street on the north of the site, Black Eagle Street, now the east-west section of Dray Walk. A Truman took over the business in 1679 and the business expanded. 1789 it was taken over by Sampson Hanbury (1769-1835) uncle to Robert. Another of his nephews, Thomas Fowell Buxton, joined the company in 1808. By 1816 the company was named Truman, Hanbury, Buxton & Co, and on Hanbury's death in 1835 Buxton took it over. By 1853 the brewery was the largest in the world.

In 1873 the company expanded into Burton where the water was particularly suitable for brewing. The Brick Lane site continued in operation but production gradually moved to Burton. Take-over by the Grand Metropolitan Group in 1971 and merged with Watney Mann in 1972. In 1989 Brick Lane closed. Since then it has been redeveloped as the Old Truman Brewery, with offices, shops, restaurants, etc.

Zythophile has a thorough, detailed, history and we have them to thank for the picture, from 1842.

This 1890 insurance map shows the brewery stretching north up to Quaker Street and over to the east side of Brick Lane, absorbing streets in the process.

This section lists the memorials where the subject on this page is commemorated:
St Michael's School, Chester Square - statue