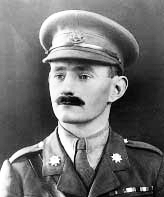 Soldier. Born Alfred James Terence Fleming-Sandes in Tulse Hill. As a temporary second lieutenant in the 2nd Battalion of the East Surrey Regiment, he was at the Hohenzollern Redoubt, France. On 29 September 1915, his company was badly shaken by continual bombing and machine gun fire. He collected a few bombs, jumped on the parapet and threw them in full view of the Germans. Although severely wounded, he continued to advance and throwing more bombs until he was again wounded. This inspired his men and saved the situation. For his actions, he was awarded the Victoria Cross.
After the war, he joined the educational department of the Sudan government, and was awarded the Order of the Nile. Later, he was appointed a Judge of the Sudan High Court. Upon his return to England he became chairman of the Pensions Appeal Tribunal for England and Wales.

This section lists the memorials where the subject on this page is commemorated:
Second Lieutenant Alfred Fleming-Sandes, VC