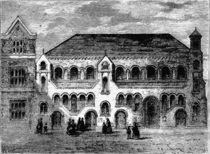 Crown Court Church is unique in its history as the longest-established Presbyterian church in England, dating from 1711. The Church of Scotland has been active in London since the time of James VI, King of Scots, who became King James I of England in 1603. There is some evidence that courtiers of the King who had followed him from Scotland worshipped in a chapel in the precincts of the old Whitehall Palace. This site became known as “Scotland Yard” and subsequently housed the original offices of the Metropolitan Police. There has been a Scottish Kirk on the present site in Covent Garden since 1719.  The current building was completed in 1909, replacing the original.

The ever-valuable British History provides this picture, captioned "The Scotch National Church, Crown Court" but it puzzles us because it does not appear to date from 1719 - more like the late 19th century Victorian Venetian style. Perhaps there were two, or more, buildings prior to the current one.

The second Scottish church in London was built in 1884 in Knightsbridge, St Columba's.

This section lists the memorials where the subject on this page is commemorated:
Scottish National Church

A church has existed on the site since at least Saxon times. Work on the pres...

Survived the Great Fire but was so badly damaged in WW2 that for the period 1...

Nonconformist minister.  Born Suffolk.  His mother was great-granddaughter of...