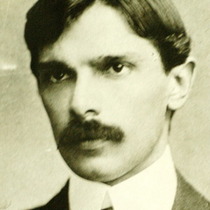 Founder and first Govenor-General of Pakistan. Born on Christmas day and died on 9/11 - any celebrations of this man will have to compete with other newsworthy events. Born and died in Karachi.

Sammaa quoted author and academic Ayesha Siddiqa: "... Jinnah went to London in late 1890s and lived in Kensington. ... He had gone to hear the speech of Dadabhoy Nooroji who got elected to the House of Commons around that time.” She said that the neighborhood “still doesn’t compare with Hampstead where he went to live later in 1930. He first joined the Fabian Society which later became Labour Party and wanted to get a ticket and contest elections like Dadabhoy Nooroji”. “He didn’t succeed so then joined the Conservative Party and tried the same but failed. Afterward, he returned to India and took up leadership of the Muslim League. He lived in a large house in the Heath of Health neighborhood. The house is no longer there but was very close to where Rabindranath Tagore and DH Lawrence also lived,”  “.. the pub King William IV which he used to frequent which is why they have a photo of him inside,” the author added.

This section lists the memorials where the subject on this page is commemorated:
Quaid-e-Azam Muhammad Ali Jinnah

A champion of English freedom, establishing the campaigning newspaper "The No...

A Metropolitan borough of the County of London. It was amalgamated with the M...

Chairman of the Committee to build The City of London School near Blackfriars...