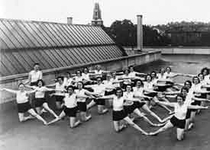 Founded by doctors George Scott Williamson and Innes Pearse as an integral part of the 'Peckham Experiment', the area being chosen because of its deprivation. Nine hundred and fifty local families were recruited, who paid one shilling (5p) a week for access to a range of physical activities. Members underwent a medical examination once a year, and were monitored as they participated in the centre’s events. The original centre closed in 1925 and re-opened in 1935 in a purpose-built establishment, the one in the photo. It closed through lack of funding in 1950 and in 2000 was converted to private flats, retaining the original indoor pool. The building is a Grade II* listed Modernist building, described by Walter Gropius as "an oasis of glass in a desert of brick". Its address: The Pioneer Centre, Frobisher Place, St Mary's Road, SE15.

This section lists the memorials where the subject on this page is commemorated:
Pioneer Health Centre

The materials used in the construction of the 1861 International Exhibition w...

A centre dedicated to stimulating understanding and engagement between Britai...