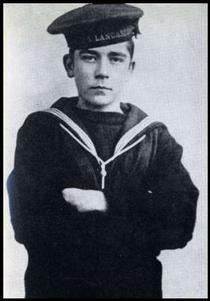 Born at Clyde Place, Leyton. Killed at the Battle of Jutland, aged 16. We thank Jamie Davis for finding this link to the British Pathe news film of the unveiling, by MP Dr MacNamara, of Cornwell's grave monument on 31 December 1920 at Manor Park Cemetery.

216: An article in the Guardian referred to Cornwell's heroism and prompted correspondence on the letters page pointing out that there is no evidence and that the government used the incident for propaganda.

This section lists the memorials where the subject on this page is commemorated:
John Travers Cornwell, VC

National Society for the Prevention of Cruelty to Children

A charity campaigning and working in child protection in the United Kingdom a...