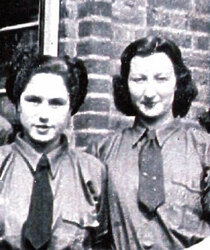 Firewoman with the Auxiliary Fire Service. Killed during an air-raid at Cubitt Town School which was being used as an emergency depot. She was aged 18.

According to both the Metropolitan Borough of Poplar's Register of Civilian World War Two Deaths and the Commonwealth War Graves Commission, she was the daughter of G and E. G. R. Bartlett and lived at 61 Henia Street, but it would appear that both these organisations have incorrectly recorded the initials of her parents.

She was a telephonist for the Auxiliary Fire Service and died of injuries resulting from enemy action, aged 18 years, on 18 September 1940, when a parachute mine fell on AFS Fire Station 35U, located at St Luke's Church of England Primary School, Saunders Ness Road, London, E14 3EB.

She was buried with Firewoman Violet Irene Pengelly on 10 October 1940 at the City of London and Tower Hamlets Cemetery, Southern Grove, London, E3 4PX. Her name is recorded on both the National Firefighters Memorial, Carter Lane Gardens, St Paul's Churchyard, London, EC4M 8BX and on a plaque at St Luke's School that lists not only both firewomen but also the other 24 Civil Defence personnel who were killed by this one bomb. She is also recorded in the Civilian War Dead Roll of Honour held in St George's Chapel, Westminster Abbey.

This photo is from a page on London Fire Journal about Bartlett and Pengelly where no information is given about the photo but, 'save image as' and you see it is named 'Bartlett Sisters'. However Andrew's research above shows that Joan Bartlett did not have a sister living at the time she was in the Auxiliary Fire Service. They don't even look like sisters and we think the photo probably shows Bartlett and Pengelly, but  which is which we could not say.

This section lists the memorials where the subject on this page is commemorated:
Joan Bartlett

In memory of Joan Bartlett, aged 18 and Violet Pengelly, aged 19. Members of ...

Born Yorkshire. Ruler of the Punjaub during the Sepoy Mutiny of 1857. Viceroy...