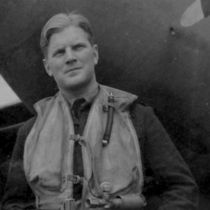 RAF fighter pilot. Born John Randall Daniel Braham in Holcombe, Somerset, and known as 'Bob'. In World War II, he was one of the most successful night fighter pilots. He was awarded the DSO & Two Bars, DFC & Two Bars and AFC. In 1944 he was shot down and imprisoned by the Germans.

He was the most highly decorated airman in RAF Fighter Command. After the war he joined the Royal Canadian Air Force, and continued flying until his retirement, when he joined the Historic Sites Department of the Department of Indian Affairs and Northern Development. Died in Nova Scotia.

This section lists the memorials where the subject on this page is commemorated:
J. R. D. Braham

Political activist and writer. Born in what is now Lithuania. Emigrated to US...

Canadian personnel who served and died in WW2

85,000 Canadian personnel served in 48 RCAF Squadrons and with numerous RAF u...