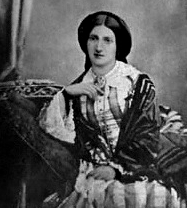 Cookery writer. Born Isabella Mary Mayson in Milk Street in the City (according to the ODNB; Wikipedia has her born in Marylebone and her family moving to Milk Street shortly after). Another family in Milk Street at the time was the Beetons and in 1856 Isabella married Samuel Orchart Beeton and entered his publishing business.

Within a year she was writing on domestic matters for the 'English Woman's Domestic Magazine' and had begun 'Beeton's Book of Household Management' for which she is best remembered. She claimed this was 'incessant labour', but it is believed that a lot of her recipes were 'borrowed'. Died at her home, Mount Pleasant, Swanscombe, Kent following the birth of her fourth child.

This section lists the memorials where the subject on this page is commemorated:
Isabella Beeton

{Surrounding the Epsom and Ewell Borough arms with the motto 'None Such':} 19...

Whitebait were caught by this type of craft in the River Thames, until 1950. ...

Erected uder the will of Sir W. Eastfield.  Destroyed in the Great Fire but r...