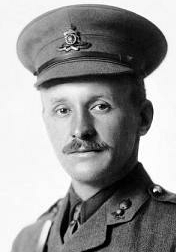 Soldier. Born George Thomas Dorrell in Paddington. Wikipedia informs that he joined the army at the age of fifteen and first served in the Second Boer War. On 1st September 1914, at Néry, France, during a fierce attack, in which all the officers of 'L' Battery were either killed or wounded, he took over command and continued to fire one of the guns until all the ammunition was spent. For this action, he was awarded the Victoria Cross. Died in Cobham, Surrey.

Our colleague, Andrew Behan, has researched and produced more information about this man. Public records Andrew found seem to give differing dates of birth. Baptismal and school admission registers record his date of birth as 7 June 1880 whereas the 1939 England and Wales Register and his death registration record states he was born on 7 July 1880.

He was baptised on 24 May 1881 at St Jude's Church, Kensal Green and the baptismal register shows the family still at 23 G Street. On 29 January 1884 both he and his sister were admitted into the Moberley Road School, Harrow Road, and the school records show the family were living at 57 Harrow Road. They both left this school on 5 January 1886 and he continued his education at Campbell Street School, Maida Vale.

He was 15 years old when he joined the Royal Horse Artillery in December 1895, although the ‘official’ age registered was 19. His regimental number was 12343. He gained rank and served in the Second Boer War as a Sergeant, being awarded the Queen's South Africa Medal with six clasps for Paardeberg, Dreifontein, Johannesburg, Diamond Hill, Belfast and Relief of Kimberley. He also received the King's South Africa Medal with both the 1901 and 1902 clasps. He went on to serve in India in Lucknow until March 1906 and qualified as a Battery "Rough Rider".

By 1908 he was based at the Royal Artillery Barracks at Ipswich, and on 7 April 1908 he was initiated as Freemason in the Corinthian Lodge, No.3093, at Freemasons' Hall, Soane Street, Ipswich, Suffolk giving his occupation as a Sergeant, Royal Artillery. He was promoted further to Battery Quartermaster Sergeant in December 1908 and was the Battery Sergeant Major in 1911. By the outbreak of war in 1914, he would have been an experienced and highly trained gunner and he entered France on 16 August 1914.

On 1 September 1914, at Néry, France, 'L' Battery, was covering the retreat of the British army from Mons, Belgium, when they were attacked by a strong German force with 10 field guns and two maxim guns. Three British guns were brought into action but two were quickly silenced during a fierce attack by the enemy. All the officers of 'L' Battery were either killed or wounded, including Captain Edward Kinder Bradbury (1881-1914) who, although mortally wounded in having had one leg taken off by a shell, continued to direct the firing of the one remaining gun. Following this officer's death he took over command with the support of Sergeant David Nelson (1886-1918) and continued to fire until all the ammunition was expended, having put nine of the German guns out of action and causing the enemy to bolt.

He was gazetted for the Victoria Cross alongside Captain Bradbury and Sergeant Nelson on 16 November 1914. His VC was presented to him by King George V at Buckingham Palace on 13 January 1915. He was promoted to Temporary Lieutenant, Temporary Captain and then Lieutenant by June 1915. He continued to move up the ranks throughout 1916, becoming Commander of A/122 Battery, Royal Field Artillery, in September 1916. He was then promoted to Acting Major and appointed Commander of B/190 Battery, Royal Field Artillery, in March 1917. He held his command until July 1919. He was appointed Adjutant 90th (1st London) Field Brigade, Royal Field Artillery, Territorial Force, on 2 March 1920. He retired from the Regular Army on 23 September 1921 with the rank of Major and seniority from 14 March 1919. The same day he was granted a commission in the Territorial Force as a Captain and continued as Adjutant of 90th (1st London) Field Brigade at Handel Street, London, until 16 September 1926.

In addition to his Victoria Cross he was also awarded the 1914 Star with the 5th Aug - 22nd Nov 1914 clasp, the British War Medal 1914-1918, the Victory Medal and Oak Leaf Emblem for twice being Mentioned in Dispatches. Additionally he was awarded a General Service Medal and the Long Service & Good Conduct Medal.

On 3 June 1925 he was made a Member of the Most Excellent Order of the British Empire for his services with the 90th (1st London) Field Brigade RFA. The MBE was presented to him by King George V at Buckingham Palace on 4 July 1925. Having attained the age limit of liability to recall he ceased to belong to the Reserve of Officers on 2 July 1926. He relinquished his Territorial Army commission on attaining the age limit on 17 October 1928 and transferred into the Regular Army Reserve of Officers with seniority as a Lieutenant-Colonel. In 1937 he received the King George VI Coronation Medal.

The 1939 England and Wales register shows him living at 146 Palewell Park, East Sheen with his wife and daughter, Lucy. His occupation was recorded as a clerk - probate, dividend and shares. His daughter was a shorthand typist.

In the Second World War he served in the Home Guard from May 1940 and was promoted to Major and appointed Company Commander in the 27th (Roehampton) Battalion, County of London Home Guard on 1 February 1941. For this service he received the Defence Medal 1939-1945. Captain James Edgar Leach VC (1892-1958) also served in the same unit as him.

Electoral registers from 1950 to 1959 show him and his wife residing at 5 Oakfield Court, Queens Road, Weybridge, Surrey. In 1956 he attended the Nery Day celebrations at Hildesheim, West Germany during which he handed over Captain Edward Bradbury’s VC to L (Nery) Battery RHA on behalf of Bradbury’s nephew. Telephone directories from 1960 to 1963 show him listed as Lt Col. G.T. Dorrell, VC, MBE, at Green End, Surrey Gardens, Effingham, Surrey.

He died, aged 90 years, on 7 January 1971 at home at 30 Bray Road, Stoke D’Abernon, Cobham, Surrey. Although he had been long retired from the army he was accorded the honour that would have been given to a serving officer. He was given a regimental funeral with his coffin on a gun carriage escorted by The King’s Troop, Royal Horse Artillery, to Randalls Park Crematorium, Leatherhead, Surrey where his ashes were scattered in Plot B-9, K-7.

His VC is now owned by L (Nery) Battery RHA and is currently on loan to the Imperial War Museum alongside the other two Nery VC's and the 13 pounder gun he used in the 1914 engagement. He is also named on a memorial at the Royal Artillery Chapel, Woolwich, on the Victoria Cross and George Cross Memorial Stone, Wandsworth Town Hall, Wandsworth and as one of the 64 freemasons who were awarded the Victoria Cross in WW1 on pavement plaques outside Freemasons' Hall, Great Queen Street, London, WC2B 5AZ.

This section lists the memorials where the subject on this page is commemorated:
George Dorrell, VC

The plaque is on the pavement to the left of the war memorial.  More informat...

Field Marshal. Born near Bristol, brought up in Birmingham. Fought and wounde...