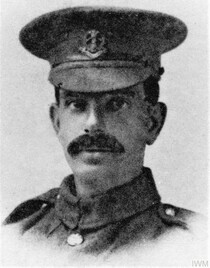 Private George Henry Dawkins was born on 23 October 1883, one of the seven children of George Henry Dawkins (1847-1921) and Susannah Dawkins née Linger (1852-1927). His birth was registered in the 4th quarter of 1883 in the Marylebone registration district. He was baptised on 9 December 1883 in the parish of St Marylebone. The baptismal register shows the family was living at 44 North Street and that his father was a greengrocer's salesman. (North Street has subsequently been renamed as Frampton Street).

The 1901 census shows him as a 'postman acting', still living in three rooms at 10 South Street, Marylebone, with his parents, four siblings: Maud Marion Dawkins a dressmaker, Edith Annie Dawkins (b.1879) also a dressmaker, Louise Catherine Dawkins and Ada Dawkins, together with a cousin Lavina Newboy. His father was described as a 'house porter'. In November 1901 he was appointed as a postman in west London.

He enlisted as a Private in The Duke of Cambridge's Own (Middlesex Regiment), service number G/22770, and was serving in their 2nd Battalion when he was killed in action, aged 33 years, on 23 October 1916. As he has no known grave he is commemorated on Pier and Face 12D and 13B of the Thiepval Memorial to the Missing of the Somme, Picardy, France. Unfortunately, the Commonwealth War Graves Commission has recorded his name incorrectly on both the memorial (as Dawkings G. H.) and on their website (as Private George Henry Dawkings).

This section lists the memorials where the subject on this page is commemorated:
G. H. Dawkins