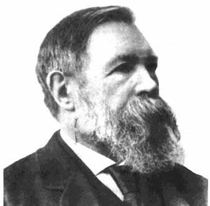 Political philosopher. Born Barmen, Germany. Died at home in Regent's Park Road. The Oxford Dictionary of National Biography says at number 41 but there is no suggestion anywhere else that the Engels lived at two different addresses in Regent's Park Road. Possibly the street has been renumbered since 1895, or perhaps the ODNB confused Engels' place of death with Marx's, who died at number 41 Maitland Park Road.

Engels lived and worked in Manchester 1842-1870, except for a period of 5 years spent in Europe. In 1870 he moved to London. Like many people he holidayed at the seaside and he became very attached to Eastbourne. On his doctor's advice he had moved to Eastbourne a few weeks before he died though immediately before his death he had returned to London. In August 1895 his ashes were scattered into the sea from the top of Beachy Head at Eastbourne. This information comes from Sussex Sedition.

This section lists the memorials where the subject on this page is commemorated:
Friedrich Engels

Deputy Chairman of the St Pancras Vestry General Purposes Committee in the la...